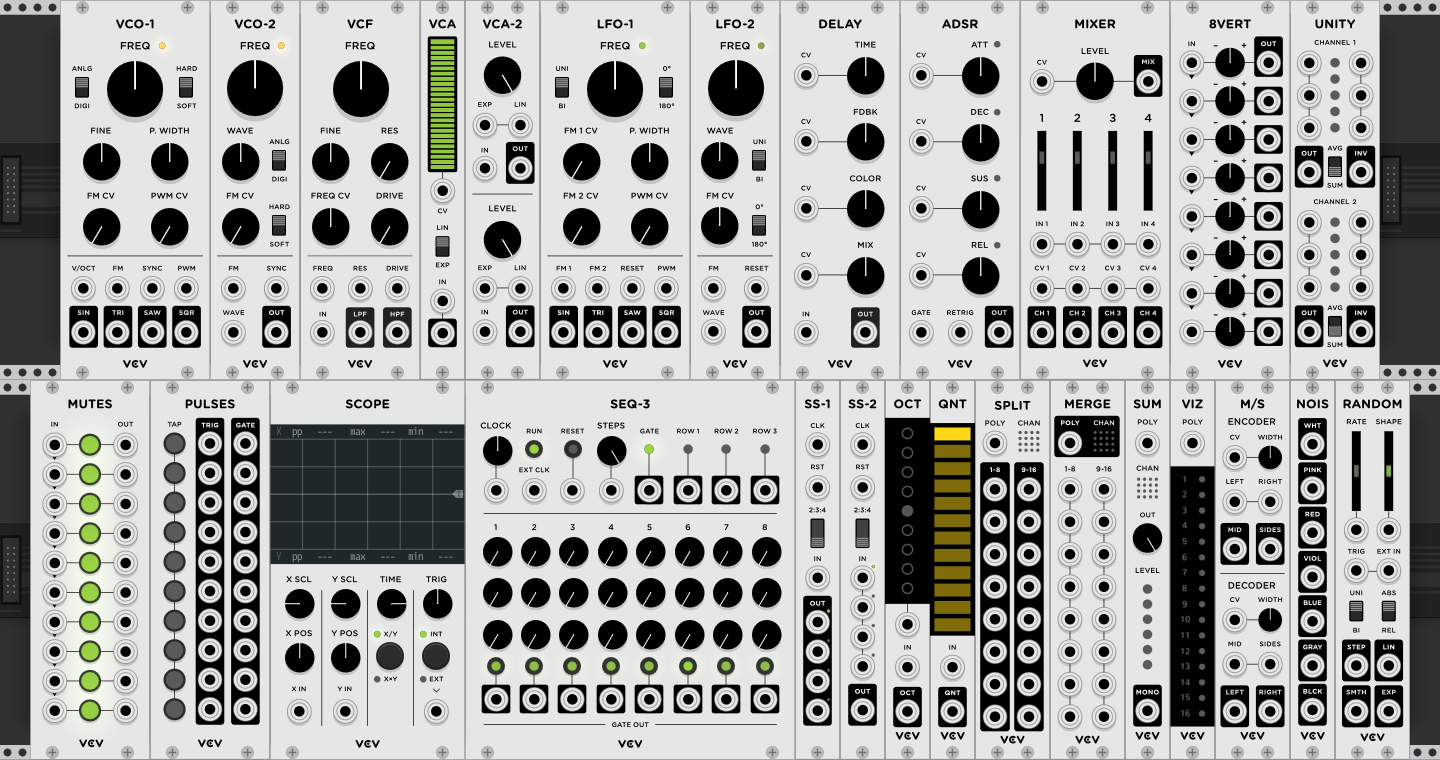 VCV VCO is a voltage-controlled oscillator that continually generates raw tones at a particular frequency controlled by a voltage signal. It is a traditional analog modeling oscillator with four output waveforms: SIN (sine), TRI (triangle), SAW (sawtooth), and SQR (square).

The pitch of the oscillator is controlled by the FREQ knob, with a range of 9 octaves. In its initial states with FREQ at a 12-o’clock position, the note C4 (middle C) is generated.

To control the pitch externally, use the V/OCT input or the FM input. The V/OCT input tracks pitch at 1V/octave, meaning that an increase of 1V increases the pitch by one octave, doubling the frequency. This is the standard used in virtually all MIDI interfaces, quantizers, and sequencers in VCV Rack.

The FM input applies an additional pitch adjustment with an included attenuator knob. With the FM CV knob hard-right, the FM input functions similarly to the V/OCT input. At lower knob positions, a smaller adjustment can be made to the pitch, for subtle vibrato, for example.

The SYNC input applies hard-syncing to the waveforms by resetting the phase of the waveform when the sync signal passes upward through 0V. If an audio-rate signal is patched into the SYNC input, the result is a waveform having characteristics of both the internal and sync frequencies. By pressing the SOFT switch, soft-sync is used instead, which reverses the direction of the waveform when the sync signal triggers. This results in a “softer” effect with lesser harmonics than hard-sync.

The PULSE WIDTH knob adjusts the duty cycle of the square waveform, and the PWM input and its attenuator knob allow external pulse width control. The following are examples of a digital square wave with 1%, 25%, 50%, and 75% pulse width.

You might have noticed that the saw and square outputs include a “ripple” or “wiggle” around the waveform’s jump discontinuities. This effect is called the Gibbs phenomenon and is the result of using an anti-aliasing algorithm to generate only frequencies below the Nyquist frequency (half the sample rate).

A voltage controlled filter removes a range of frequencies from an audio signal, with its cutoff frequency controlled by an external voltage. VCV VCF models a 4-pole transistor ladder filter with saturation at each stage.

A Voltage Controlled Amplifier allows the level of an audio or CV signal to be controlled by another CV signal.

A signal passing through IN to OUT is attenuated with the LEVEL knob with a gain ranging from 0 to 1.

If a CV signal is patched into LIN, the signal is also attenuated based on this control voltage, or “enveloped” by the control voltage ranging from 0V to 10V. A CV of 10V applies a gain of 1, while a CV of 0V (as well as negative CV) mutes the signal completely.

The EXP input gives an exponential response for more exaggerated and faster envelopes.

In this figure, a constant sine wave is being attenuated by an ADSR envelope CV signal (pink), using a VCA to combine the signals into the enveloped output (blue).

A low frequency oscillator is a voltage-controlled oscillator that is designed to oscillate at lower frequencies than audio rates. VCV LFO is nearly identical to VCV VCO, with a few differences.

The range of the frequency knob is much lower than VCO, ranging from one oscillation roughly every 4 minutes to 1000 Hz.

The UNI/BI switch toggles between unipolar (0V to 10V) and bipolar (-5V to 5V) output. In both of these modes, the peak-to-peak difference is always 10V.

The 0°/180° switch inverts the output signal when in 180° mode. In unipolar mode, this inverted signal will still oscillate between 0V and 10V.

The RESET input behaves identically to the SYNC input of VCO.

The FM 1 and FM 2 inputs both have attenuator knobs FM 1 CV and FM 2 CV. If either of these knobs is turned hard-right, the corresponding FM input turns into a 1V/oct input, so every increase of 1V will double the frequency.

The output generated by LFO is similar to VCO but without anti-aliasing, so there is no Gibbs effect.

VCV 8vert is utility module with 8 inputs, 8 attenuverters, and 8 outputs. An “attenuverter” is an attenuator that can apply both positive and negative gain.

Each attenuverter can apply a gain ranging from -1 to 1. In each knob’s initial position at 12-o’clock, a gain of 0 is applied, resulting in a silent output signal. Positioned hard-right, the input signal passes through without modification, and positioned hard-left, the input is inverted, flipping its value.

The top input of VCV 8vert is normalized to 10V, meaning that a constant 10V signal is used instead when no cable is patched. All other inputs are normalized to the input above it, allowing inputs to “copy” their signal downward.

When no inputs are patched into a channel and all channels above it, these inputs are all effectively normalized to 10V. This turns 8vert into a constant voltage generator with voltages set by each of the attenuverters from -10V to 10V.

As another example, if a cable is patched into the first input only, all channels below receive the same signal and can attenuvert it independently based on each attenuverter’s position.

VCV Unity is a dual unity mixer for audio and CV, each section with six inputs, which directly adds multiple signals without gain adjustment.

The OUT port directly sums all six inputs above it. The INV port inverts/negates this signal.

If the switch for each channel is in the AVG position, the output of that channel is the average of the patched inputs instead of the sum.

Right-click the panel and select Merge channels 1 & 2 to combine all 12 inputs. Both outputs produce the same signal in this mode.

The VCV Mutes utility module contains 10 rows of switches which allow quick control over muting a signal. Click a button to toggle the mute state of each channel.

Each input is normalized to the input directly above it. In other words, all inputs “copy” their signal to the channel below it. For example, Mutes is able to function as a multiple module that copies one input to up to 10 outputs, with additional mute control for each output.

Like other modules, randomization and initialization from the module’s context menu can affect the state of the mute buttons.

Click a TAP switch to generate a 1ms long 10V pulse signal (per the trigger voltage standard) in the row’s TRIG output. While the TAP switch is pressed, the GATE output generates 10V, otherwise it generates 0V. Octave shifts a 1V/oct pitch signal by whole octaves, ranging from -4 to +4. Patch a pitch signal into IN, and the shifted pitch signal is at OUT. If no cable is patched into IN, Octave generates fixed whole number voltages.

For pitch signals that follow the “1V/octave” standard, Octave adds/subtracts 1V to shift it up/down by one octave, as the standard’s name would suggest. This makes Octave a very simple module to understand and use.

To specify the number of octaves to shift, click on a circle in the main display. Circles above the middle circle represent upward octave shifts, and circles below it represent downward octave shifts. Octave’s display is a normal parameter, so you can right-click it to manually enter a shift amount, map the parameter with VCV MIDI-Map, etc.

The octave shift amount can be modulated with CV and is computed by taking the nearest whole number voltage of the CV input.

Split and Merge convert polyphonic signals to multiple monophonic signals and vise-versa. Refer to the Polyphony entry of Rack’s manual to learn about polyphony in Rack.

Split expands a polyphonic signal patched into the POLY input to multiple monophonic outputs labeled 1-8 and 9-16. If the polyphonic input signal includes less than 16 channels, all unpatched channels are considered to be 0V.

It is possible to create zero-channel polyphonic signals with Merge. See Polyphony Technical Details for an explanation of zero-channel cables.

Sum mixes all channels of a polyphonic signal patched into the POLY input to produce a monophonic signal at the MONO output.

The CHAN lights indicate the number of channels Sum is mixing.

Summing multiple audio signals usually results in an increase of audio levels, so you can account for this by adjusting the OUT level. Pay attention to the LEVEL VU meter to avoid clipping. For example, a four-voice polyphonic signal can increase the peak amplitude by 4, so it is a good idea to apply roughly 25% attenuation with Sum.

Viz visualizes the values of each channel of a polyphonic signal.

Patch a polyphonic signal into the POLY input. Active polyphonic channels are represented by white channel numbers. The light on the right of each channel number emits green for a positive signal, red for a negative signal, and yellow (rapidly blending red/green) for an audio-rate signal.

Mid/side stereo is useful for a number of reasons, such as processing each channel in different ways while applying the effects symmetrically on the left/right. For example, you can use a mono reverb on the mid channel to apply a bit of reverb to the center of a stereo signal while still roughly preserving stereo image. It’s not perfect, but it’s better than mono—try it!

The WIDTH knob and CV input increases or decreases the stereo width during encoding or decoding. This is done by simply applying a gain to the side channel. You can use VCV Mid/Side as a left/right stereo widener by patching the encoder’s mid/side outputs to the decoder’s mid/side inputs.

The formulas for each output are

In its default position, width = 1.

VCV Noise generates 7 colors of noise, each with a different characteristic and frequency response.

White noise (WHT output) has equal intensities at all frequencies. Each voltage is sampled from a normal distribution.

Pink noise (PINK output) has more bass, and its intensity decreases by -3 dB/octave.

Red noise (RED output) has even more bass, and its intensity decreases by -6 dB/octave.

Blue noise (BLUE output) has more treble than white noise, and its intensity increases by +3 dB/octave.

Violet noise (VIOL output) has even more treble, and its intensity increases by +6 dB/octave.

Gray noise (GRAY output) is calibrated to a psychoacoustic equal loudness curve. The human ear does not hear all frequencies with equal intensity (e.g. white noise sounds louder around 1000 Hz than 100 Hz, although its actual power density is the same), so a filter with an equal loudness frequency response is needed to produce noise that sounds uniform across the audible frequency range. In particular, the gray noise generated by VCV Noise is inverse A-weighted.

Black noise (BLK output) has no single standard definition, so VCV Noise defines it as “uniform noise”, i.e. voltages sampled from a uniform distribution. Uniform noise has nearly the same frequency response as white noise, except that it contains aliasing. This effect is similar to early digital noise generators or poorly-designed software noise algorithms. However, uniform noise is useful for sample-and-hold sources, CV, and other non-audio purposes.

VCV Random is a random CV generator with 4 types of randomness and a triggerable sample-and-hold function.

The SHAPE slider and its CV input adjust the shape of all four random outputs. At its lowest position (0%), all outputs immediately jump to the new random value when the clock is triggered. At higher values, the behavior depends on the output used.

The UNI/BI switch toggles between unipolar (0V to 10V) and bipolar (-5V to 5V) output voltages.